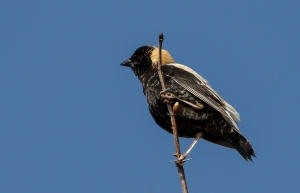 Also at Bee Meadow Park, possibly the warbler of the day since this species was so wide-spread in the mocosocoBirds area:

The pond of the Melanie Lane Wetlands is completely flooded, almost to the parking area on both the north and south sides. Nevertheless, 2 resourceful Greater Yellowlegs were found on a flooded corporate lawn across the street from the soccer facility.