A Caspian Tern was a south-bound flyover at the parking lot at Chimney Rock this morning (Jeff Ellerbusch). This is the first known record of this species for Somerset County. 14 species of warblers were also recorded at Chimney Rock today.

From Ken Hart:
“Prothonotary Warbler last seen at East Observation tower, Lord Stirling Park, 9:30AM. Also, just saw 2 Common Ravens here, just south of the tower. Chestnut-sided Warblers were everywhere this morning along the river at Lord Stirling. Must have counted 10 males (no females). Plus Yellow and Yellow-rumped Warblers in the double digits (12 and about 30 respectively). And seven other Warbler sp. as well as three Baltimore Orioles. All before 9 AM.”

Yesterday, Kevin Browne kayaked the Passaic River and took the following photos of the bi-county Prothonotary Warbler – a confirmed nester. 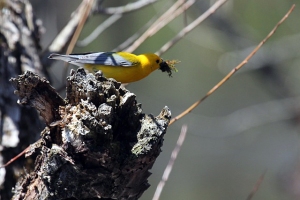 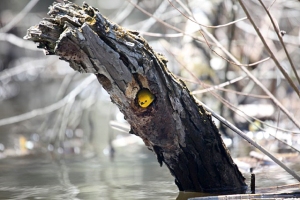 From Leslie Webster:
News from Loantaka Brook Reservation: It was all about Catbirds this morning; they seemed to have arrived en masse. Three Baltimore Orioles were at Kitchell Pond, as well as three Great Egrets. The most productive stretch for warblers was the first 1/4 mile along the gas line, from the Loantaka Way parking area. Present were Ovenbirds, Black-and-White, Common Yellowthroat, American Redstart, Northern Parula, Chestnut-sided, Black-throated Blue, Yellow-rumped, and Black-throated Green. At the pond, Yellow and Pine warblers rounded out the count.

Warblers were plentiful in any appropriate habitat today. Get out and enjoy the next few weeks. 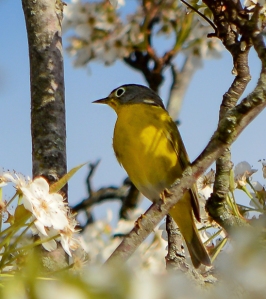