2014’s first Wilson’s Warbler in the mocosocoBirds region was at the Wildlife Observation center of the Great Swamp NWR (Jim Mulvey).

Sourlands Mountain Preserve in Hillsborough Twp. had 4 Solitary Sandpipers, Tennessee and Hooded Warbler among other species  (eBirded by Vicki Schwartz).

From Tom Ostrand, Sunday, May 4:
“I went on the Duke Farms Dawn Chorus walk this morning (led by Mike Pollack). There wasn’t a lot of activity, probably due to the cold night and overcast day. The most interesting moment was an Eastern Whip-poor-will calling at about 5:15 (in the core section of Duke Farms). After daylight, the group walked around the estate for another 3 hours. I counted 47 species, with only 7 warblers, 95% of which were Yellow-rumps (at least 50, seemingly everywhere).

After the group walk, I made my first-ever visit to Finderne Wetlands. Very little activity there, the only slightly interesting bird was this Solitary Sandpiper that let me get surprisingly close before it decided to move on. 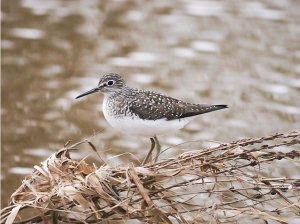 More interesting than the birds were the 3 guys from the Central Jersey Stream Team, who were hard at work hauling hundreds of tires out of the riverbank. They told me they think most of the tires were dumped at one time around 1980, possibly by Somerville or Bridgewater (the town govts!), in a misguided attempt to prevent erosion. They will possibly have state support to continue the cleanup, which will require heavy equipment to actually carry the tires away. Some of them have steel cores, and are extremely heavy.” – Tom Ostrand 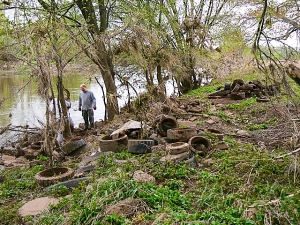