Lincoln’s Sparrow and White-crowned Sparrows were between the north gate bridge and the overlook on Pleasant Plains Road, Great Swamp NWR this morning (J. Klizas).

The following hybrid was found in Flanders yesterday at a private location by Michael Bochnik. It doesn’t show in any of the photos but the individual has yellow wing bars. It is not a pure Brewster’s Warbler and not a pure Lawrence’s Warbler but something backcrossed in between. All ideas are welcome. An interesting article from the American Birding Association archives on Golden-winged x Blue-winged offspring  is here. Click on the photos for a larger image. 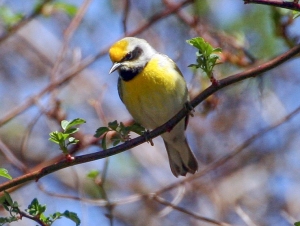 From Leslie Webster:
“News from Loantaka Brook Reservation: the stretch of path along the gas line from the Loantaka Way parking area, and into the woods to the path crossroads, continues to be very productive for warblers: Ovenbirds, Black-and-whites, Common Yellowthroats, American Redstarts, Northern Parulas, Magnolias, Chestnut-sided, Black-throated Blues, Black-throated Greens, Prairie, and Yellow-rumped were all present and singing this morning. A Pine Warbler continues in the Pines near Kitchell Pond, and the Yellow Warblers are well established at the pond. A dazed looking Vesper Sparrow was on the ground next to the Loantaka Way parking lot. New to the area are Scarlet Tanager (pointed out by another birder), a scattering of Veeries throughout the woods, and a Kingbird at the pond. Two Solitary Sandpipers were dueling in the back pond.”