Today’s sightings have the distinct feeling of moving into the last phase of spring migration with Olive-sided Flycatcher, Mourning Warbler and Gray-cheeked Thrush reports.

An Olive-sided Flycatcher was at Chimney Rock late this afternoon (Jeff Ellerbusch). Other species present were Yellow-billed and Black-billed Cuckoos and 3 Hooded Warblers, two of which were counter-singing, the recording of which can be heard here.

Another Olive-sided Flycatcher was in the Great Swamp NWR this afternoon along the wilderness trail at the end of White Bridge Road (Simon Lane).

A Mourning Warbler was at Scherman Hoffman Sanctuary in Bernardsville this afternoon (Jim Gilbert). 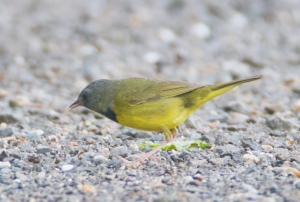 A Gray-cheeked Thrush was singing along the side of Pleasant Plains Road, south of White Bridge Road, in the foggy and damp Great Swamp NWR this morning. Click on the following link to hear a low fidelity recording made with an iPhone 5.

2 Glossy Ibis are at the flooded Melanie Lane Wetlands. Two were reported from here earlier in the season. A Bobolink was also present. Boblinks are relatively more widespread in Morris County than usual this spring with reports from the Great Swamp NWR (Fenske Visitors Center and Woodland Road), Troy Meadows (Dog park on S. Beverwyck Rd.) and Melanie Lane along with previous reports from various fields in Harding Township and elsewhere. 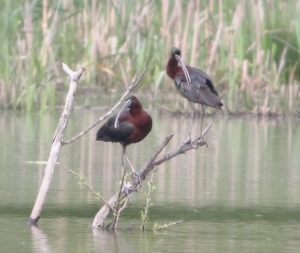 And a Blackpoll Warbler from the Great Swamp NWR, photo by Mitch Van Beekum: 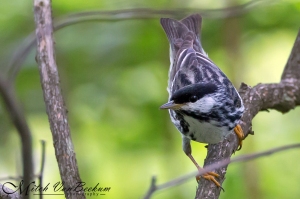