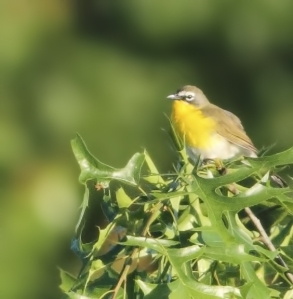 The heavily cropped photo above is from early this morning. The Yellow-breasted Chat is near Bullfrog Pond at Lord Stirling Park. It was found by Mike and Thom Almendinger yesterday, June 1, but may be the same individual found by Bob Auster the previous weekend.