Posted on September 14, 2014 by Jonathan Klizas

On Friday, September 12, 2014 in the Great Swamp NWR, Kurt Hasselman found and photographed the first New Jersey record of Funereal Duskywing (Erynnis funeralis). It was on Goldenrod in the parking area of the White Bridge Wilderness Access area. The butterfly was not relocated today despite searching by many people. This butterfly species, whose range is from the southwestern United States south to Argentina, may be a first regional record as well. A description of the species and a range map at the Butterflies and Moths of North America web site is here. This record is verified by members of the North Jersey chapter of the North American Butterfly Association (NABA). 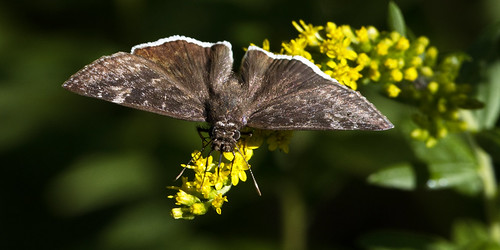 Except for some Killdeer and Spotted Sandpipers, shorebirds have vacated Boonton Reservoir. 5 Blue-winged Teal represent the first of the season in the mocosocoBirds region. Also present were 34 Gadwall, 20 Green-winged Teal, 1 Hooded Merganser, 1 Pied-billed Grebe and 2 sub-adult Bald Eagles.

The Morris and Somerset hawkwatch reports will appear later today. 40 Broad-winged Hawks were eBirded from Fairview Farm by Zach Batren and Holly Ellerbusch this afternoon.

This is the week on the calendar when the major push of Broad-winged Hawks should come through our area. Visit Hawkcount.org to view data from most of the North American hawkwatch sites. mocosocoBirds posts reports from Chimney Rock in Martinsville and Wildcat Ridge in Hibernia.