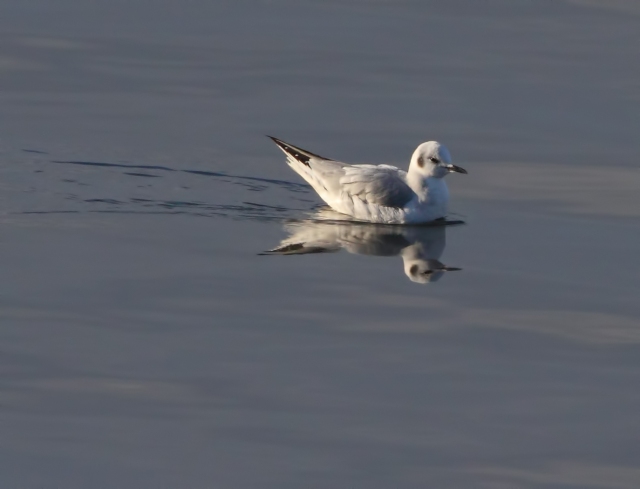 The outside temperature on the Prius dashboard read 16 degrees Fahrenheit at 7:30 this morning at the north end of Lake Hopatcong. It felt colder. The lake is frozen again from slightly south of the Brady Rd. bridge going north. A Bonaparte’s Gull at Nolan’s Point was the highlight of the morning. There are no Tundra Swan reports from Lake Hopatcong this season but the many Mute Swans should be searched more thoroughly than this writer’s frozen body was willing to.

eBird users note: Most of Lake Hopatcong lies in Morris County – from Lake Forest and Liffy Island in the north all the way to Hopatcong State Park in the south where the source of the Musconetcong River defines the Morris/Sussex border. Bertrand’s, Halsey and Raccoon Islands are all within Morris County Borders. The entire eastern shore and all the coves that go with it are in Morris County. The western shore is Sussex County. The Lake Hopatcong hotpspot in eBird lies in Sussex County. There are many issues with eBird’s geography but, so far, any rants about this have not been heeded. Be careful when submitting eBird checklists and make sure you know the correct borders. Google maps and eBird map county borders cannot be entirely trusted.

Approx. half of the Hooded Mergansers at Lk. Musconetcong, NJ, Nov. 29, 2014 (photo by Jonathan Klizas).

Lake Musconetcong is frozen except for the section in the northeast part of the lake pictured above. Approximately 105 Hooded Mergansers and 5 Buffleheads were actively diving in this small section of open water this morning.

Many Morris lakes were frozen last weekend and then thawed on November 24-25 during a warm period. They are freezing once again as the calendar turns into December and Christmas Bird Count season is in the near future.

Mt. Hope Lake is 80-90% frozen with a Gadwall, 4 Hooded Mergansers, 13 Ruddy Ducks and 12 American Coot keeping company with the 28 Canada Geese and 2 Mute Swans in the remaining open water. The two resident Bald Eagles were roosting in the nest tree this morning.

The southern third of Budd Lake is ice-free but this morning there were no birds on it other than 8 Ring-billed Gulls and a Herring Gull.

At dusk, the gull and goose roosts are building at Budd Lake. By 4:20 p.m. 190 Ring-billed and 180 Herring Gulls gathered on the ice at the middle of the lake. 84 Canada Geese, 2 Common Mergansers and 3 Horned Grebes were in the available open water.

Lake Parsippany is almost entirely frozen. A few gulls are on the ice. Mute Swans congregated in the open water near the west beach.

Also today, Chuck Hantis found and photographed a Vesper Sparrow at Melanie Lane Wetlands. This is a late record for the Morris and Somerset County region. Click on the photo for a larger image. 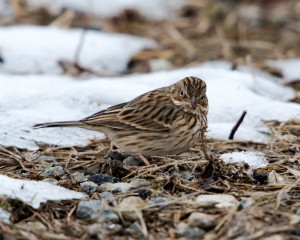