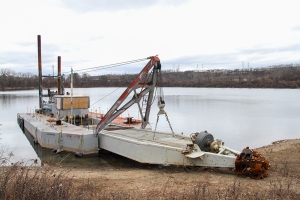 The above photo is of the S.S. Nipper, grounded on the shore of Kenvil Lake in the Iron Hills country of Morris County.  A drill bit is attached to the structure at the tip of the bow.

Kenvil Lake is in Roxbury Township. It lies within an industrial zone. It is uncertain whether this lake was property of the Hercules Powder Co., which was active from 1871 and during both world wars, although it is next to the location of the factory according to maps. Incidentally, the word Powder refers to high-explosive gunpowder. The Kenvil Hercules Powder Factory is infamous for the explosion that killed 51 workers in 1940 (see an article about that incident here).

Kenvil Lake’s aquatic aesthetic includes discarded machinery, as in the S.S. Nipper above, numerous oil drums, tanks and other debris scattered about. The Raritan Headwaters Association lists Kenvil Lake as part of the “Lamington River (above Rt 10) Subwatershed.”

Dell Avenue Park is on Kenvil Lake’s west side and offers the best view of waterfowl. Whatever the attraction may be, over 50 each of Lesser Scaup and Ruddy Ducks have been residing in the lake all season. A Ring-necked Duck or two, Mute Swan, American Coot, Ring-billed Gulls, Bald Eagle and Common Ravens can all be found at the lake. This morning, a surprise and brief visitor was a female Long-tailed Duck who did not stay around long enough for a photograph (J. Klizas).

The Long-tailed Duck was gone by afternoon, but what was a sleeping female Mergus sp. in the morning became an active Red-breasted Merganser later in the day (Alan Boyd).

This morning in the Great Swamp NWR, two Common Redpolls were in a Sweetgum tree near the Bluebird Lot along Pleasant Plains Rd. (Simon Lane).

Tundra Swans are creating the pattern of being an annual winter visitor at Lake Hopatcong. They were hidden this season, if they were there at all, until this morning when three adults were grouped together among the throng of Mute Swans in the area between Brady Rd. Bridge and Nolans Point. 2 Common Loons were north of Bertrands Island. 100+ Buffelheads are scattered around the lake.

Gulls are the dominant creature at Lake Hopatcong in the winter. Many of the overnight roosting gulls are gone within an hour of dawn, either driven to flight by hunger or by the inevitable appearance of one of the resident Bald Eagles.

The evening gathering of gulls is a spectacle. This past Thursday, well over 1,000 gulls, a mix of Herring and Ring-billed, created seven or more circling, drifting, dissolving and intertwining groups over Nolans Point in the twilight. It was surreal. A tiny segment of one group is represented in the photo below. 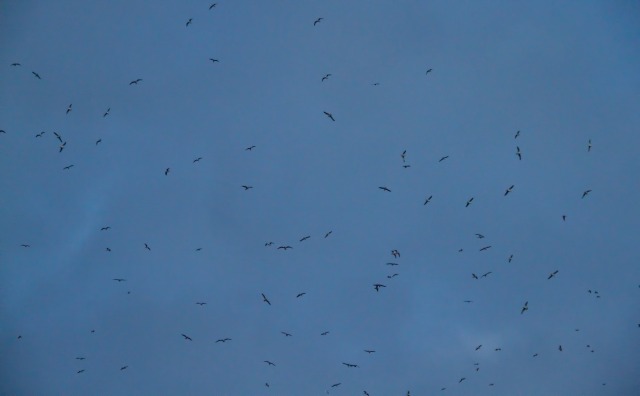 The Greater White-fronted Goose of Duke Island Park continues (Andrew Lucas via eBird). If it is not on the front lawn of the park, it may be in the Raritan River where it was found the past two days. This is a similar pattern to the Duke Island geese the past few years.