The weather forecast called for an eventually sunny sky with the temperature reaching 40 degrees Fahrenheit. The reality was a steely gray overcast the entire day with the temperature in the mid 30s. There was no precipitation. All bodies of water were open and filled from recent rains. Wind was negligible.

Farewell to the Knapps

All those associated with the Boonton CBC bid a warm and fond farewell to Carol and John Knapp. This is their final Boonton CBC as residents of Denville since they are moving to Delaware (maybe they will return to the count next year as New Jersey expatriates) . Thank you for the many decades of service you gave to the Boonton CBC and especially for organizing the very productive Denville area. A big thank you for the parting gift of a Golden Eagle for this year’s count! 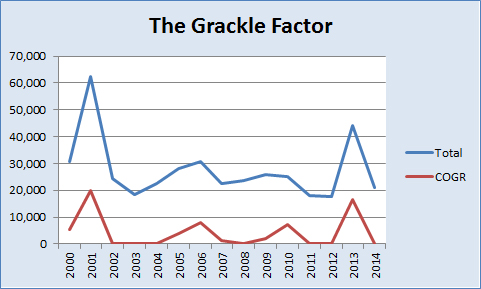 Thank you, all participants

A hearty thank you to all who participated in this year’s count. Your hard work is the only reason this report can be written.

Mark your calendar: the preliminary date for next year’s Boonton CBC is December 27, 2015.

This report is also at the following location on the mocosocoBirds.com web site:
https://mocosocobirds.com/birds-of-morris-county-n-j/boontoncbc/2014-2/

A list of the species found on this CBC is at the following link:
https://mocosocobirds.com/birds-of-morris-county-n-j/boontoncbc/species-list/

You can also access these pages through the Birds of Morris County > Boonton Christmas Bird Count menu item on the mocosocoBirds.com web site.

A wonderful holiday birding season to all!