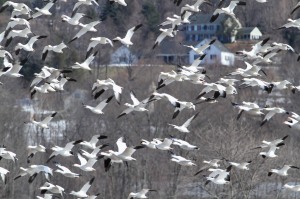 The Snow Geese of Long Valley were not at the temporary lake on Beacon Hill this morning. They arrive some time later in the day. By 3:15 PM, approximately 1,300 Snow Geese were at the lake; down from 2,300 yesterday. Local residents say the geese are an annual occurrence at this location. Amazingly only a scant 200 Canada Geese were present, down from 5,000+ the day before. That is because they were out feeding in the many cornfields of Washington Township as would be observed later.

At 4:00 PM, most of the Snow Geese lifted off and headed north, the same behavior as seen yesterday although slightly earlier in the afternoon.

At least 25 adult blue-morph Snow Geese are present. No rarities have been sighted despite diligent searching. 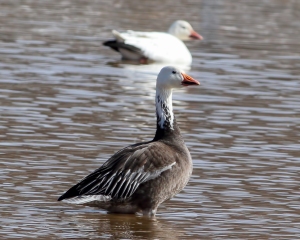 Eastern Phoebes are slow to arrive in the mocosocoBirds region in 2015. A possible report was on March 17 when one was spotted in Bernards Township (Jennifer Books). Two reports came today from Duke Island Park (Marc Chelemer, Jeff Ellerbusch).

And readers, that is it! None in Morris County so far. Is it late for Eastern Phoebes? Their typical arrival dates are between March 10-20. Tomorrow, March 20, is the vernal equinox with snow in the weather forecast. Morris, you may have to wait.

The first Osprey of 2015 in either Somerset or Morris Counties was spotted today at Duke Island Park (Jeff Ellerbusch).

Incidentally, the Greater White-fronted Goose of Duke Island Park is reported by Marc Chelemer this morning. It was not seen later in the afternoon. The original sighting of the goose is posted here.

Two collared Canada Geese were seen and photographed March 17 at Melanie Lane Wetlands. Both collar codes were submitted to www.reportband.gov. The reports on these geese were received yesterday, twenty-four hours after submission.

A Mink Tale by Jim Mulvey

From Jim Mulvey:
While at Glenhurst yesterday, I saw 2…perhaps 3 different Mink. The photo of the one in the water is in the Passaic River. While walking along the back area, I observed this one mink on the ice far out on the larger pond. It was repeatedly diving into the water and then popping back out to shake dry and roll on the ice.

I took a few pictures and then started up the trail with the hope of a closer shot at a better angle. It turned out that the Passaic River had other ideas as that trail was flooded. Upon my return, the mink was nowhere to be found on the ice, but right at the area where it had been was this dead Hooded Merganser that was not there previously.