A Common Loon was at the Lincoln Park Community Lake this afternoon (Jill Homcy). This is the first Loon reported in Morris County since January 2.

Little by very little, lakes and ponds are giving up the ice. There were still ice fisherman at the northern section of Lake Hopatcong this brutally cold morning, but at least a little open water is appearing near the docks and shorelines. It may be mid-April or later before the ice is completely gone.

The 5 Redheads, 1 Greater Scaup hen and 4 American Coot continue at Bertrand Island for over one month. Ring-necked Duck numbers are growing wherever the water is open.  120 were scattered throughout the lake this morning along with 27 Bufflehead and 47 Common Mergansers.

Boonton Reservoir has a changeable mix of waterfowl. Today, 3 Common Goldeneye and small amounts of American Wigeon and Green-winged Teal joined the 230+ Common Mergansers, 1 Red-breasted Merganser and 33 Double-crested Cormorants in the water. 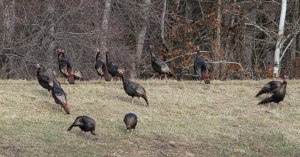 The alert Wild Turkeys in the image above are regulars at Florham Park Fields. The water in the ponds has thawed and contained 12 Ring-necked Ducks, 12 Hooded and 14 Common Mergansers. At least, 8 Killdeer were in the fields. 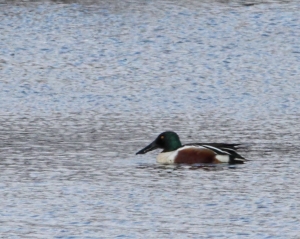