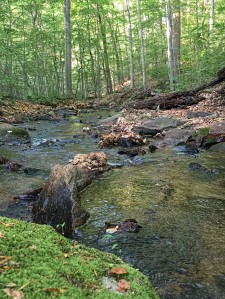 2015 is the 10th year of the National Park Service Landbird Monitoring Program administered by the Vermont Center for Ecostudies.

Morristown National Historical Park, commonly known as Jockey Hollow, is the southern most park of this study. The southeastern part of the park was censused this morning. The count consists of a 10 point survey with the observer spending 10 minutes at each point. This particular route, labeled Primrose Brook, contains one section requiring a bushwhack through some dense Japanese Barberry as well as climbing over and around numerous trees felled by Hurricane Sandy in 2012. Other than that, it is a walk in the park, albeit usually not on established trails. The photo below shows a tag that helps to guide the observer around the route.

An Acadian Flycatcher called at the intersection of Patriots Path and the Camp Trail where it crosses Primrose Brook. This species was regular in the park thirty years ago but has become scarce in recent decades.

Many observers reported a pair of Blue Grosbeaks in a field near the Orientation Center at Duke Farms yesterday, May 29.

A Cerulean Warbler was found along the Righter Mine Trail, Rockaway Twp. yesterday (David Bernstein).