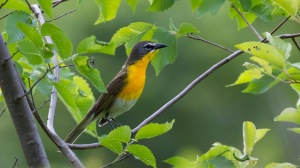 As Chris Thomas shows in the above photograph from yesterday and Stuart and Wendy Malmid found out today, the Yellow-breasted Chat continues at Lord Stirling Park. This is the second consecutive year for a Chat at the Bullfrog Pond location.

One species that is missing this year from the Morris and Somerset area is Red-headed Woodpecker. A few were seen earlier in May at Glenhurst Meadows along the Passaic River, but none were seen or heard on the Long Hill Wetlands side of the river today and have not been reported for two weeks despite regular coverage by birders on the Glenhurst Meadows side of the river.

The Long Hill Wetlands are frequently flooded, or at least wet, with a series of ditches filled with varying levels of water. The ditches are currently no more than moist mud. Mosquitos and Poison Ivy abound – and also a Great Egret hanging out in a tree overhanging the Passaic River as seen in the photo below.

Another missing species is White-eyed Vireo, at least from the Washington Valley area in Morris Twp. Regular at two locations the past few years, none have appeared in 2015.