The species was missed on a visit in June 2015. Today, not only was one adult seen, but two chicks, and either a third chick or second adult, were viewed at the edge of the dried Phragmites – nesting status: confirmed.

Three of the four Common Gallinules are in the distant, blurry and heavily cropped photo below. 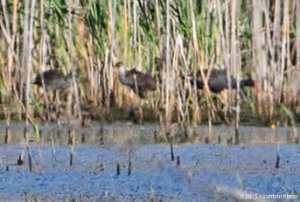 The Breeding Bird Atlas mentions an interesting point on page 220: “Common Gallinules require a complex marsh structure for successful breeding. This makes their distribution map a directory to some of the state’s most important wetland sites”.

The species entry of the Atlas goes on to mention the Walkill River system, the Hackensack Meadowlands, the Great Swamp and Mannington Marsh as examples of important wetlands as these are primary breeding territories of the Common Gallinule in the 1990’s. Based on the map for the atlas,  the only locations in Morris County found to have probable (none were confirmed) nesting of Common Gallinule were the Great Swamp and the Lake Denmark area. Hopefully, Deerhaven Lake, actually a swamp which is part of the Newark Watershed, will support this population for years to come.

21 Great Blue Herons continue at the heronry although many of the birds of the year have fledged. Two Osprey drifted by overhead. An acrobatic trio of Common Ravens called and flew by the east end of the swamp. A pair of River Otters undulated in the water, passing in front of the Common Gallinules at one point. Plenty of Wood Duck ducklings and adults in eclipse plumage are spread throughout the wetlands. A Louisiana Waterthrush was calling and bobbing at a puddle in the woods.

After the Gypsy Moths

In summer, the section of the Four Birds Trail depicted in the above photo in Rockaway Township at 7:06 AM is usually shaded under a solid canopy of the highlands forest. The photo illustrates what the 2015 Gypsy Moth infestation has done to the woodlands in much of northern New Jersey.

Susan Elbin, the director of Conservation and Science for New York City Audubon, informs mocosocoBirds that Great Egrets were tagged this week in Jamaica Bay, New York. Please be on the lookout. A tagged Great Egret was found at Melanie Lane Wetlands, Hanover Twp. on July 17, 2012 and was a bird of the year tagged in New York.

New York City Audubon in partnership with New Jersey Audubon attached transmitters to two Great Egrets to see how they spend their days. They were caught at Wolfe’s Pond on Staten Island. One stayed in Staten Island for the most part, and the other went to the Raritan Bay. They both stopped at Hoffman Island which is the largest rookery in the Harbor Herons complex.