The invasive Water Chestnut (Trapa natans) is discussed in an earlier mocosocoBirds post worth reading, here. The situation has not changed at the bodies of water mentioned in that article from 2015. This pernicious plant is eradicated wherever possible by concerned and energetic individuals attempting to conserve a vanishing habitat. It is a noble endeavor that should be supported, of course.

Unfortunately, many privately owned and remote locations are inevitably overrun by this particular invasive. This is evidenced at the Lincoln Park Gravel Pits and other locations from the aforementioned mocosocoBirds post from 2015.  Other locations in the northeast are documented in myriad sources discussing this subject.

The main lake at the Pits is part of a privately owned property whose owner could not care a bit about the plant that blankets nearly 75% of the water during the summer. One wonders what the local beaver family thinks of this salad mix encroaching upon their lodge.

What continues to be of interest to this observer is how avian wildlife is attracted to this recent addition to local aquatic culture. A visit to the Lincoln Park Gravel Pits early Sunday morning reinforced prior observations that birds do like Water Chestnut mats.

The Pits is one of the few reliable migrating shorebird locations in Morris County, and is a very modest one at that. The shorebird habitat this year, referred to as “the flats”, is in the poorest condition seen in recent years. The usual shorebird flats are flooded enough to keep out the peep and other usual species. The areas of the flats not waterlogged are choked with shin-deep vegetation.

So, where is a hungry migrating shorebird to feed at The Pits? The Water Chestnut buffet mat! Sunday morning, twenty-eight Least Sandpipers, two juvenile Lesser Yellowlegs along with eleven Green Herons, a varying number of Great Egrets and Great Blue Herons, a small group of Red-winged Blackbirds and occasional other fly-by species were all partaking of whatever it is they are finding on this suffocating tangle of invasiveness. Even the solo Killdeer (usually there are 20-30 here this time of year) a juvenile Spotted Sandpiper and a genuinely Solitary Sandpiper were at the edge where the mat meets the little available mud.

You may rightfully hate it, but we are forced to live with it. It is an aquatic version of Kudzu and people will never be able to get rid of all of it. 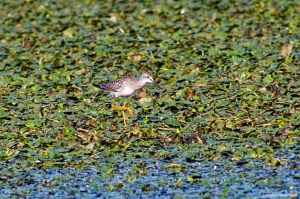