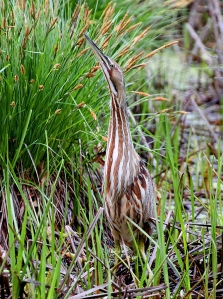 Jim Mulvey found the above American Bittern in the Great Swamp NWR today. 2 were seen last night from the Overlook on Pleasant Plains Road (Simon Lane).

The Yellow-crowned Night-Heron found this morning by Rob Gallucci and seen by others in the morning was not relocated in the afternoon. It was originally found south of the East Observation Tower at Lord Stirling Park.

7 Great Egrets were in the Passaic River along the Fisherman’s Trail at Lord Stirling Park (Rob Gallucci). In fact, Great Egrets are currently quite noticeable in the north Somerset/south Morris area.

A Snowy Egret was seen on private property in Somerset County.

A Marsh Wren was at Troy Meadows this morning (Mike Ostrow).

A male Bobolink was seen and heard at Duke Farms (Dan Morley).

The Yellow-throated Warbler continues for a 16th day at Colonial Park, Parking Lot A (David Bernstein).