Posted on November 5, 2014 by Jonathan Klizas

A heavily cropped, noisy photo on an increasingly dark and cloudy, late afternoon is the best one could do with the above Snow Bunting at Budd Lake. Three Snow Buntings, found yesterday by Alan Boyd, continue on the municipal beach at the south end of the lake. They are on the water’s edge either on the sand (see another heavily cropped photo below) or on some rocky sections of the beach. Occasionally, they lift off and fly around the beach and over the water, eventually returning to the same location along the edge of the beach.

The lake has a growing number of waterfowl: 20 Gadwall, 4 American Wigeon and 46 Ruddy Ducks. The 14 Ring-billed Gulls present today will grow into the hundreds and possibly thousands of mostly Herring and Ring-billed Gulls later in the autumn and into the winter with Great Black-backed Gulls in much lesser numbers. Lesser Black-backed Gull is an annual visitor here. Glaucous Gull and Bonaparte’s Gulls are also recorded at Budd Lake.

A male and female Redhead at Lake Musconetcong are the first of the season in Morris and Somerset Counties. Also on the lake this afternoon were 4 Lesser Scaup, 6 Hooded Mergansers, 2 Ruddy Ducks, 1 Pied-billed Grebe and the usual Canada Geese, Mallards Mute Swans, Double-crested Cormorants and Ring-billed Gulls. 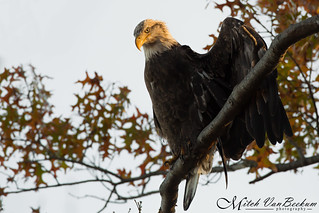