Posted on September 13, 2015 by Jonathan Klizas 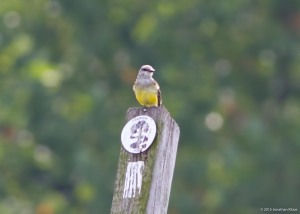 A Western Kingbird appeared at Veterans Memorial Park in Whippany, Hanover Twp. this morning and is present as this is being written. The Kingbird favors the Patriots Path post markers near the power line.

Park in the baseball field lot on Papermill Drive. Walk around the hurricane fence to the dirt road under the power line. After a short distance you will see bare dirt that intersects with Patriots Path. The Western Kingbird is in this area. It often goes to the ground eventually returning to the post. Earlier it flew to various snags along Malapardis Brook but eventually returned to the post.

This is the first Western Kingbird reported in Morris County since the Boonton Christmas Bird Count in December 2003.

Veterans Memorial Park is an excellent location in the late summer and fall. Vesper, White-crowned and Savannah Sparrows are annual. Eastern Meadowlarks are nearly annual in October. Migrants are found near the dip by Malapardis Brook. The link for the eBird hotspot is here.

Bee Meadow Park, known for Morris County’s only Say’s Phoebe in 2011, is nearby. The Whippany, Hanover Twp. area may look unassuming but has many nooks and crannies worth exploring. A guy named Dunne grew up here. His first name is Pete.